The Adventures of Frank the Cat
by Elizabeth Crooks 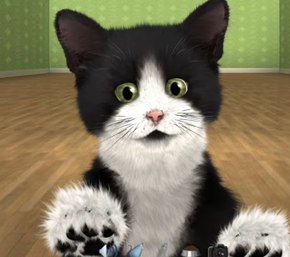 Frank is a black and white tuxedo tomcat who lives in a small town called Lakeside. His owner, the elderly Ms. Rose, lets Frank roam around the town during the day where he spends his time going on a myriad of adventures with his two best friends, Sam and Fluffy.

Follow Frank as he gets his friends in to (and out of) trouble, solves mysteries, and sets off on quests only a cat’s mind cat come up with. See what hijinks a trio of cats can get themselves into as they learn the value of friendship, honesty, and how everything turns out okay in the end, especially if you believe it will!

The town of Lakeside is so small that everybody knows everybody and most people commute out of town to the big city for work. With the town square in the center, including the town hall and the small Main Street Park, there are two apartment complexes, one on the northwest corner and the other on the northeast corner. The one on the west side has the senior living apartments and the one on the east side is larger for single family living. The main shopping district is east of the town square and includes David’s Groceries and Bob’s Hardware. Main Street houses a few independent shops, boutiques and the town post office. South of the square is the Waterfront District with several rows of houses that lead into the forest and lake which Lakeside is named for. Small fish travel down the river into the lake, making it a popular fishing spot for locals and city folk on the weekends. During winter the lake freezes over. North of the square, and located behind the two apartment complexes, is Forest Park where local wildlife runs free. A walking path has recently been paved throughout the park and is used frequently.

Frank
Frank is a black and white tuxedo tomcat who lives in the senior living apartments on the northwest side of town. His owner, the elderly Ms. Rose, has a second-story apartment with a great view of town and lets Frank roam around during the day where he spends his time going on a myriad of adventures with his two best friends, Sam and Fluffy. He lives a simple life at home and is often spoiled by Ms. Rose. She may not be able to afford the newest cat toys but she makes fun ones out of toilet paper rolls and knits catnip toys for Frank and his friends. Everyone in town knows Frank and most locals have been involved in one or more of Frank’s adventures.

Sam
Sam is a gray and white tabby cat who lives with a young bachelor on the second floor of the apartment complex on the northeast side of the town square. There is a large gnarly tree next to his apartment’s balcony…that is how he escapes the day for adventures. Brian even installed a cat door so Sam can come and go as he pleases. Sam occasionally sneaks his friends, Frank and Fluffy, into his apartment when his owner is out of town. Sam’s apartment is across the street from Frank’s. His favorite pastime is playing with a ball of yarn from Ms. Rose’s yarn basket. He doesn’t think she knows he has it.

Fluffy
Fluffy is a pristine white Persian cat who is proud to have a slightly distended nose, uncommon for a Persian cat. She lives with a middle-aged couple in a moderately nice house at the end of Primrose Avenue near the lake south of the town square. Mr. and Mrs. Morrison spoil Fluffy rotten because their two human children are grown and living in the big city now. Although Fluffy survived, Mr. Morrison still lives with the fact he forgot to make sure Fluffy was inside the house during last year’s winter blizzard. Luckily for Fluffy she was at a sleepover at Sam’s place that night, but still ended up with frozen beads of snow attached to her long fur after walking home the next morning. Although she tends to get what she wants because of this incident, she has to sneak out of the house at night after Mrs. Morrison falls asleep. She gets pretty hysterical if Fluffy isn’t in the house after dark.
Take Frank the Cat on the go!

More Frank the Cat is in the Works!