What are Earth Elementals? 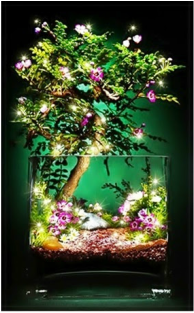 Gnomes were named by Paracelsus as the elementals of the earth. There are many other beings associated with earth as well; elves, dwarfs, brownies to mention a few. Eastern mythology names even more and they all have their own subsets of the earth that they deal with: Dwarfs mostly dwell in the mountains, Elves are mostly thought to live in the forests among the trees, watching for any ill will.

Some suggest that it would be better to group all of the elementals under the category of "Nature Spirits", which may in fact be a better way to do it. It seems that there is a tremendous amount of information that is left out of our knowledge today. Much of the information we have comes from Fairytales and the imagination of writers throughout history. It seems to me though, as I continue with my own journey, that imagination stems from reality, whether or not we can sense or see that reality is where we run into disbelief. By assuming that "imagination" really means that things "don't exist" or they are "made up" we are leaving out the idea of divine creativity. It is possible that many of these beings are simply in dimensions which are hard for us to see and/or communicate with because we are not on the same frequencies.

Let's not forget about the trees! Trees, while part of the earth, also seem to have their own entities that dwell within or protect them. Again there are many names that come from both Eastern and Western mythology, among them being tree spirit, dryad, deva, nymph and so on. I believe that the stories of these beings are what eventually led to things like “tree-hugging” because it is a way to get in touch with, or “ground”, to the earth using the help of the energy of the tree and possibly the help of its spiritual inhabitant as well.

As you can see it is hard to narrow down a name for the earth elements. Perhaps they are all just one being but have manifested differently to different people, like metamorphosis. Or perhaps there are different ones that do different jobs. Or maybe the stories that are told have mixed up several beings from several different dimensions. It is hard for me to say at this point but I am hoping to one day be able to find this information out by communing more with nature and the beings that reside within her.
We are only loading a few pictures into the slideshow at a time so that we do not bog down any computers. We will upload new ones as we take them.
To view previous pictures please join us on Instagram.